The hidden costs of reorganisations and downsizing

Extract from David Parmenter’s  Working Guide: The hidden costs of reorganisations and downsizing

Contrary to common advice do not act quickly to remove staff as you probably don’t know enough at the moment.  The companies that emerged from the 2007-08 crisis in the strongest shape relied less on layoffs to cut costs and leaned more on operational improvements. That’s because layoffs aren’t just harmful to workers; they’re costly for companies with a whole raft of costs including:

By my calculations (see Exhibit 2), an organization with 500 full – time employees that is contemplating dismissing between 50 and 70 staff members would be no worse off if the staff members were kept on and redeployed, where possible, for up to 2-2.5 years.

In other words, if the turnaround is going to be within this period you would be a mug to downsize.

If the staff can tap into their unexploited entrepreneurial potential they might be able to find new revenue streams to help cover some of their salary costs and thus the breakeven could stretch to three years.  A period longer than the last two recessions mentioned. 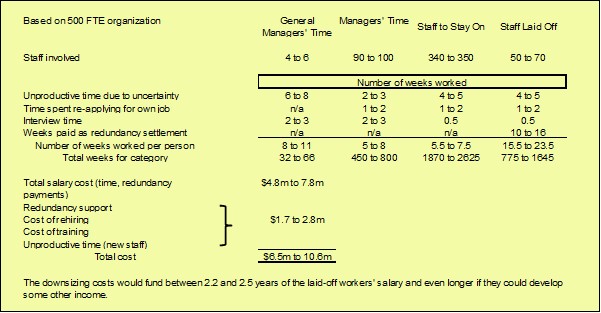 After the stock market crash in 2000, Honeywell laid off nearly 20% of its workforce and then struggled to recover in the downturn that followed. So when the Great Recession hit, in 2008, the company took a different approach, as Sandra J. Sucher and Shalene Gupta describe in their 2018 HBR article, Honeywell furloughed employees for one to five weeks, providing unpaid or partially compensated leaves, depending on local labour regulations. That saved an estimated 20,000 jobs. Honeywell emerged from the Great Recession in better shape than it did the 2000 recession in terms of sales, net income, and cash flow, despite the fact that the 2008 downturn was much more severe.

A Checklist to Put You off a Reorganization

Before you look at a reorganization, complete the checklist in Exhibit 1.